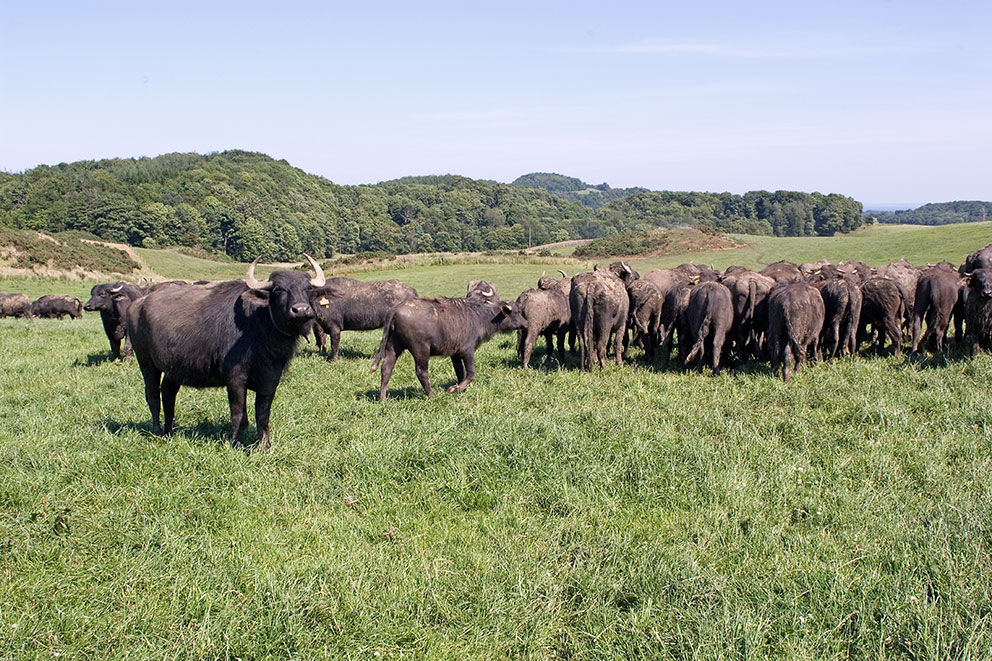 The rolling hills of the Scottish Lowlands, within a stone’s throw of Kirkcaldy, is not the first place you would expect to find a herd a Water Buffalo roaming the countryside, but there is nothing ordinary about Steve Mitchell and his wonderful Buffalo Farm.

Standing up to 6 feet tall at the shoulder (the Buffalo, not Steve), these formidable mammals with sparse black coats can weigh up to 2,650 pounds, so it is strongly recommended that they be approached with courtesy and politeness (we recommend removing your cap and remembering your Ps and Qs). This is something Steve is all too aware of, as they can sometimes be a little feisty and he has found himself at the wrong end of their long horns on several occasions.

He will be the first to admit that the risks are worth it however, because they also happen to be extremely tender, succulent and tasty when cooked.

Water Buffalo is a cut above the rest! Buffalo has fine marbling which is of course, something we all look for in meat to ensure tenderness, but it is still very lean, about half the fat of normal cattle. All health perks aside, the most noticeable thing about the buffalo is its texture and flavour, much more tender, and softer, than beef. The flavour is more delicate, less pronounced, but still satisfyingly meaty. Perhaps the reason for their excellent flavour is that they are the same animals they were thousands of years ago, as they have not been subject to many of the modern intensive farming practices.

Steve is also very proud of his herd of Aberdeen Angus. Angus Beef is renowned around the world for its superior flavour and Steve maximises the quality by hanging the prime hind quarter on the bone for a minimum of 21 days and usually nearer 30 days. The hind quarter produces the majority of the tender steak cuts, fillet, sirloin, ribeye and T-bone as well as the classic roasting joints such as topside, silverside and rump.

If you like good beef you’ll love buffalo - many people describe it as how beef used to taste! Steve is passionate about his animals and how they are looked after and fed. He uses traditional farming methods with as little intervention as is best for the animals.

Shop the range - The Buffalo Farm

Orders are dispatched in 3 working days on Monday to Thursday by courier for next day delivery.