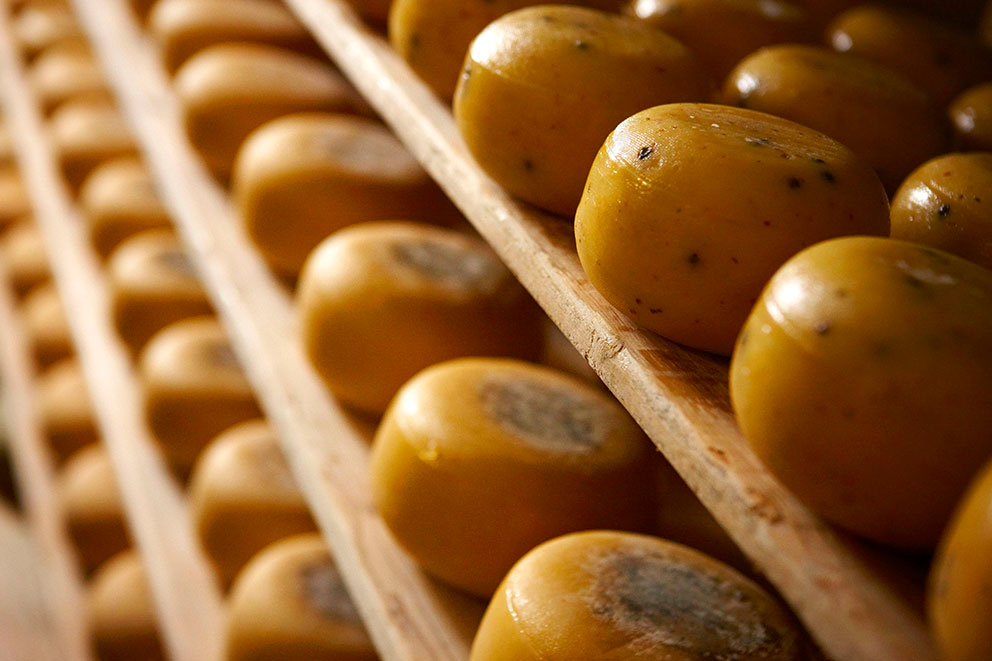 Teifi Cheese is the longest established artisan cheesemaker in Wales. Over 3 decades they have become one of the most highly awarded cheesemakers in Britain.

Some of the finest cheese counters in the UK stock more cheese from Wales than any other part of the British Isles. This is largely down to the rich clover filled fields of Wales.

'Celtic Promise’, Teifi’s semi-soft, pungent cheese, is one of only two cheeses in Britain to reign ‘Supreme Champion’ twice at the British Cheese Awards.

The Teifi range is loosely based on Dutch gouda (please read below to find out why), but rather than a mild cheese preferred by the Europeans, Teifi is stronger and sharper with plenty of flavour.

Teifi’s Caerphilly cheese, a traditional Welsh cheese, smoked or plain, completes a range that has earned this family business countless gold medals at the World Cheese Awards, Royal Welsh Show and beyond.

Teifi’s story starts in the 1970’s and 80’s in Holland, when John Savage (half Dutch, half Scottish) and his Dutch artisan cheesemaker partner, wanted to set up their own organic farm. John was an English teacher and was asked to translate, from English to Dutch, the famous “Complete Guide to Self Sufficiency” by John Seymour (which years later has become known as “the Bible” to all budding smallholders!) John Seymour invited John Savage to his organic farm in West Wales, where the latter promptly fell deeply in love with the beautiful Welsh landscape.

With prices of land in Holland being out of reach, John and his partner were able to buy Glynhyrod Farm, Ceredigion in 1981, using the proceeds from translating “The Complete Guide to Self Sufficiency”.

In 1982, their Dutch inspired artisan cheeses went on sale and they really have been at the forefront of the rise of British Artisan Cheesemaking ever since. But the story doesn’t end there, because John Savage (who incidentally has become known as ‘The Godfather of Artisan Cheesemaking in Wales’), is also partial to a glass of organic wine, organic beer and ……..the odd whisky!

Teifi Cheese are the most highly awarded cheesemakers in Britain. Their cheeses have won countless first prizes and gold medals at The Royal Welsh Show, The Nantwich Show, The British Cheese Awards and The World Cheese Awards.

Their ‘Celtic Promise’ is one of only two cheeses in Britain to have been awarded the title of Supreme Champion twice at the British Cheese Awards.

Orders are dispatched within 2 or 3 working days on Monday to Thursday by courier for next day delivery.